Medihelp off to a running (and cycling) start

Medihelp began 2019 with a running start when a combined total of more than 10 000 runners and cyclists participated in two Medihelp-sponsored events, the Medihelp Stellenbosch Cycle Tour and the Medihelp Sunrise Monster held in January and March respectively. These events promote a healthy lifestyle and provide value to Medihelp members through free entries to participate in these events.

The Medihelp Stellenbosch Cycle Tour took place on Sunday, 20 January in Franschoek, Western Cape in near perfect weather conditions. The 102 km route included a major climb of the new Helshoogte Pass (some 1 285 m of total ascent) about 65 km into the race. Upon reaching the top, the participants enjoyed a pedal-free descent into Pniel and had some time to recover before tackling the last, quick 30 km to the finish line. The winner in the men’s category, Byron Munton (20), finished the race in just over two hours, while Cherise Willeit (29), winner in the women’s category, crossed the finish line in two hours and 35 minutes.

The event was the final premier seeding event for the 2019 Cape Town Cycle Tour and had a total of 4 213 participants.

The routes contoured through the leafy residential areas of Waterkloof, Monument Park, Muckleneuk and Groenkloof in Pretoria East. Fort Klapperkop proved to be the biggest challenge for the Monster and Half Monster runners, who braved the gradual uphill climb approximately 10 km after the starting point. Medihelp volunteers offered refreshments at water points along the routes and joined spectators in cheering participants on as they made their way towards the finish line.

It was a proud day for Medihelp MultiSport, a social club for runners and cyclists sponsored by Medihelp, when three of the club’s members took podium spots in their respective distances. Velaphi Sibanyoni (40) won the veteran’s category in the 21 km Half Monster, with Brian Montsho (41) taking second place. Justice Ramaliyhana (40) was the winner in the veteran’s category for the 10 km Mini Monster.

Apart from being an excellent Comrades conditioner for serious runners, the Medihelp Sunrise Monster is also a popular event for families and friends who enjoy casual running. é 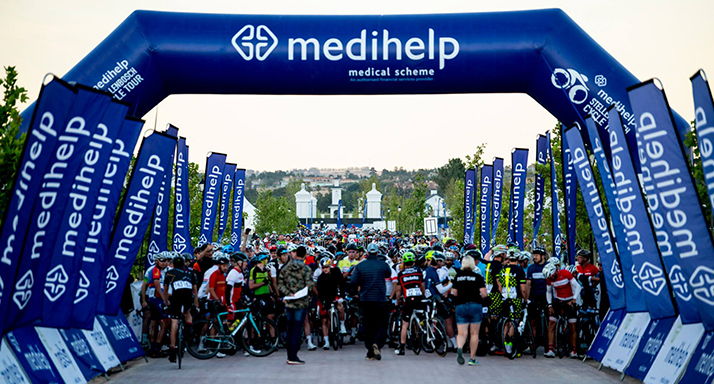